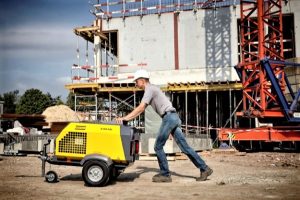 Atlas Copco can look back on a long and varied history. The company was founded in 1873 in Stockholm. However, in the beginning, mainly railway accessories were manufactured and sold.

Over the past few years, well-known manufacturers such as Krupp Berco Bautechnik (hydraulic demolition hammers and concrete shears) as well as Irmer + Elze light compressors have been integrated into the group. One of the biggest acquisitions was Ingersoll Rand – Drilling and Tunneling. The machines were marketed under the name Atlas Copco.

The business unit compressed air (compressor technology), energy (including light) and liquid handling has been called Power Technique since mid-2017.

The business unit, which had taken over the distribution of light compaction machines and concrete processing, was sold at the end of 2017.

Mid-2018, the business of drilling, demolition equipment and underground mining machines was spun off and now operates under the name Epiroc.

The headquarters of the Atlas Copco Group is located in Sweden. Since 1952 the company is also represented in Germany. The Essen location includes production companies (Atlas Copco Holding GmbH) and distribution companies as a subsidiary of Atlas Copco Deutschland GmbH. Furthermore, the company has numerous subsidiaries and dealers in 180 countries worldwide.

Atlas Copco in Germany has specialized in the manufacture, distribution and after-sales service of products for the compression of gases and air, generators, industrial tools, assembly tools and vacuum technology. These are the following product groups and types:

At the end oft he year we would like to take this opportunity to express our deepest gratitude to our customers and business partners for their  support and loyalty during such difficult times. END_OF_DOCUMENT_TOKEN_TO_BE_REPLACED