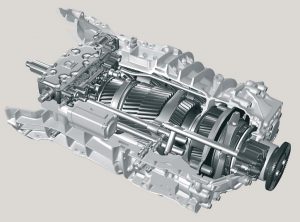 Drives and transmissions made by ZF are a trademark in the market of construction machinery.

As early as 1915, the company was founded by Luftschiffbau Zeppelin GmbH and Max Maag Zahnradfabrik.

Later, gearboxes and axles were manufactured and a new factory built in Passau. In this factory transmissions of the types 3WG, 4WG to 8WG, which are installed in heavy machinery and heavy-duty transporters and mine vehicles, were produced. Particularly often, these transmissions are installed in dump trucks and various wheel loaders. Various manufacturers successfully install the modern planetary axles with wet brakes of up to 40 tons in high-speed wheel loaders. These are the type series AP and APL.

Since the beginning of the construction of wind turbines, ZF has assisted well-known wind turbine manufacturers by intelligent wind power plant gear boxes.

The plant in Saarbrücken produces only drive technology such as gearboxes, axle drives, drive modules and drive components for cars.

In Berlin, small series and custom-made products are produced.

In 2000, Steyr Antriebstechnik Austria was taken over by ZF Friedrichshafen AG. Gearboxes for agricultural machinery, forklifts, construction and special machinery are built here.

In May 2015, ZF took over the American supplier TRW. For antitrust reasons, it was necessary to separate from the ZF Lenksysteme GmbH division in Schwäbisch-Gmünd. This company was completely taken over by Robert Bosch Automotive Steering GmbH in 2015.

The headquarters of the company is still in Friedrichshafen. 93.8% of the shares belong to the Zeppelin Foundation. This foundation is largely controlled by the city of Friedrichshafen. There is a profit transfer agreement between the foundation and the city.

At the end oft he year we would like to take this opportunity to express our deepest gratitude to our customers and business partners for their  support and loyalty during such difficult times. END_OF_DOCUMENT_TOKEN_TO_BE_REPLACED