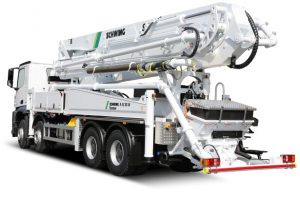 SCHWING-Stetter GmbH is a company that specializes in concrete mixing plants.

Already in 1934 Friedrich Wilhelm SCHWING founded the company Schwing in the Ruhr area. At that time, it was a small craft business that produced products for mining, road construction and the construction industry. Even then, the focus was on the development of concrete construction machines, which are still the heart of the company today. In 1965, the first mobile truck-mounted concrete pump came onto the market. Company founder Friedrich Wilhelm Schwing has done a pioneering job in this area.

Almost at the same time, the company Stetter was founded in Memmingen. Here, they quickly specialized in the construction of concrete mixers. Already in 1958 the first truck mixer was produced. And in 1964, large concrete mixing plants were already built.

In 1980 a new generation took place at SCHWING GmbH. Two years later, in 1982, Stetter GmbH was taken over from Memmingen. The result was the SCHWING-Stetter GmbH, a company that produces the entire range of concrete construction machines.

Development of the company

The Stetter GmbH was incorporated as an independent company with its own research and development department, human resources and management in the group. Meanwhile, Stetter GmbH is the largest manufacturer of truck mixers worldwide. In 2007, around 8,000 truck mixers were delivered all over the world. The majority (more than 80 percent) of Group sales is now generated abroad.

From 2001 to October 3, 2013 Gerhard Schwing led the company as the sole managing director. In 2012, a takeover took place by the Chinese manufacturer XCMG.

Today, the SCHWING-Stetter GmbH with its headquarters in Memmingen has more than 100 subsidiaries and representations and own production facilities all over the world. In 2016, 3,000 employees worldwide belonged to the SCHWING Group.