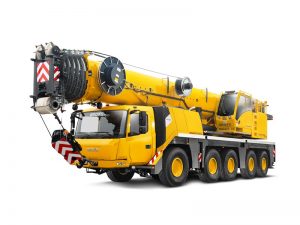 As early as 1902, the foundation stone was laid for today’s Manitowoc Group. The company was founded by Charles West and Elias Gunnell in Manitowoc, Wisconsin, USA. Here is still the headquarters of the company today. Originally, it was a manufacturer and at the same time a repair company of seagoing vessels.

Cranes from Manitowoc are built since 1928. In 1978, the product range was expanded by taking over the National Crane brand. The tower crane manufacturer Potain was incorporated into the group in 2001. One year later, the mobile crane manufacturer Grove was taken over. Since 2004, Shuttlelift carry cranes have also been part of Manitowoc’s product range.

Today the group employs about 1000 people worldwide who produce 2 cranes every day. Among the best-known models is the Grove GTK 1100, which is produced in Wilhelmshaven and presented at BAUMA 2007. In addition, truck cranes (TMS series), rough terrain cranes (RT and GRT series) and industrial cranes (GCD and YB series) are part of the product range.

After the end of World War II, the Ardelt works in Wilhelmshaven were the first to work in crane construction. After that, the company belonged to the Krupp Group (Krupp Kranbau) for decades. Particularly well known are GMT series cranes (GMT 25, GMT 30, GMT 50, GMT 60, GMT 70, GMT 140, GMT 180, GMT 250, GMT 350, GMT 500). In 1995, the crane manufacturer Grove bought the plant. Since 2002, the plant in Wilhelmshaven has been part of the Manitowoc Group from the USA, one of the world’s largest crane manufacturers. In Wilhelmshaven, they have specialized in the production of mobile cranes. These cranes can lift extremely heavy loads, such as for large-scale construction projects, accident rescue or the construction of a wind turbine.

At the end oft he year we would like to take this opportunity to express our deepest gratitude to our customers and business partners for their  support and loyalty during such difficult times. END_OF_DOCUMENT_TOKEN_TO_BE_REPLACED