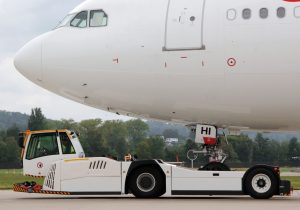 The company Schopf was founded after World War II in Ostfildern near Stuttgart.

Later, machines for pulling and moving airplanes with the help of tie rods were built and sold very successfully worldwide.

Then the company Rofan, which built small tractors for pulling baggage trucks, etc., was taken over and the products were integrated in the Schopf product range.

In 2013, the largest competitor of Schopf, the company Goldhofer from Memmingen, took over the company. Now the company operates under the name Goldhofer Airport Technology. Goldhofer also has aircraft tractors (without tow bars) in the program.

The machines of Goldhofer Airport Technology are still being built and sold in Ostfildern. The after-sales area is also looked after from Ostfildern. However, it is planned to relocate production to Nürtingen.

At the end oft he year we would like to take this opportunity to express our deepest gratitude to our customers and business partners for their  support and loyalty during such difficult times. END_OF_DOCUMENT_TOKEN_TO_BE_REPLACED