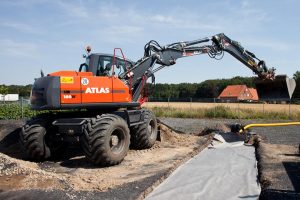 In 1999 the company was sold to EDER Handel and Beteiligungen – EDER Bagger Mainburg. Once again in 2001 it was sold to the Terex Corporation and traded under the name Atlas Terex GmbH. The wheel loader division was given autonomy and operates as Atlas Weyhausen GmbH in Wildeshausen.

They have,in the meantime, integrated the brand ‚Kaelble‘ into their product range.

Since March 2016 the company operates under the Name Atlas GmbH.

Spare parts for all front loaders, track excavators and Atlas truck mounted cranes as well as Kaelble machines are sold and supplied by Atlas Spare Parts GmbH situated in Ganderkesee.